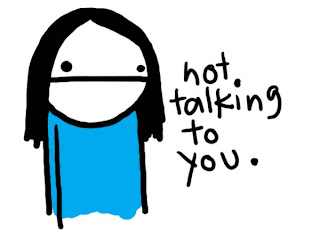 
How do I spend the bulk of my time?
Cleaning up messes of poor communication.
Now, I kind of get off on this, as it adds spice to my work and taps into my experience as a therapist.
But, honestly, I am Up To Here with the following:
1.  Absolute Lack of Self-Awareness


Personalities mirror each other and then conflict.  This is so predictable, it's almost funny if it wasn't so annoying.
Whenever I hire a strong person who is smart, opinionated and verbal, I can count down from ten before the other smart, opinionated and verbal members of my team have a problem with this person.
With no awareness whatsoever that they are alike.
2.  You're Not a Child and I'm Not Your Mother
It doesn't matter how old people get, they still tattle on each other. Like I'm going to march right over to that person, wag my finger in their face and say they better stop doing whatever it is they're doing because so-and-so doesn't like it.
Of course, each party claims that they can't speak directly with the other because they wouldn't be receptive.
Have they ever tried?  Nope.
3.  Passive-Aggressive Behavior
My Big Red Hot Button.
This is when someone is too cowardly to directly address a concern with the party involved, so they tell everyone else about it and covertly attempt to sabotage that person.
Here's the thing:  if you lack the balls to be honest about how you feel, please don't scheme behind someone's back.  Because, whether it involves me or one of my directors, things will not go well when you and I finally meet face-to-face.
You'll probably cry.
4.  Splitting
If you request something, and, after careful and fair consideration, I say 'no,' don't then go running to 'Daddy' (this figure could be almost anyone) to try for a 'yes.'  That's known as splitting and it's a cheap shot that will irritate me.
Plus, Daddy and I have already spoken.


What are your communication Hot Buttons?


Image from briansolis.com
Posted by Katy Josephine at 11:35 AM