Do You Eat Fake Food? 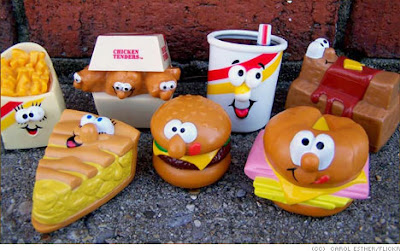 B-man and I have turned into food-label-reading geeks.  This all began as part of our Eating Like the French phase when we realized that much of what we were eating was pretend, fake food.
Have you read any low fat or non-fat food labels lately?  What the hell are all those chemicals?  Real food has a short list of ingredients and all of them are recognizable.  Just because a substance is low in calories and fat doesn't mean it's actually...food.
Let's look at low fat mayonnaise, for example.  We have a bottle from our pre-French stage in the pantry that we move from shelf to shelf, periodically reading the ingredients so we can make 'do you believe it?' comments.  This diet wonder includes chemicals that have an asterisk by them and an explanation below that states, 'ingredients not normally found in mayonnaise.'  So where are they normally found?  In asphalt?
If B-man and I weren't also frugal geeks, we would have just tossed the damn mayo instead of eyeballing it like cats ready to pounce if it makes one wrong move.  Fortunately, the expiration date is coming up, which will justify its disposal through some very serious ritual.  Accompanied by wine.  We'll probably name it first to add meaning to the ritual.  And to rationalize opening a better bottle of wine.
Don't even try to out-geek us.
Perhaps one reason French people seem snobby is because they don't want to eat our fake food.  Or maybe they're just assholes.  Either way, it seems like we'd be a lot better off to eat food that came from somewhere real instead of a food-cloning laboratory.  Let's face it, a bit of real mayonnaise never hurt anyone.
image from photographzone.com
Posted by Katy Josephine at 10:23 AM