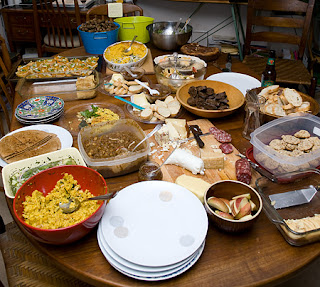 Please, God, don't make me eat at potluck events.
I promise to be good.
For the right situations, potluck can be great.  For example, if we're having a party with family or close friends, and they bring their favorite dish, it's fine.
After all, I know them and I've been in their homes.  They wash their hands after playing fetch with the dog's slimy toy, and their cats don't wander around on their counters eating the freshly made tuna salad.
But potluck with people you barely know or a bunch of colleagues from work?
Oh, hell no.
Why is it that the guy who constantly smells three days out from a shower (and shows up to work as if he just rolled out of bed) is the same guy that insists on bringing homemade casseroles to the summer potluck?
He scratches his balls and picks his nose during staff meetings, for chrissake.
This is also the dude who brags about little Jimmy and Sally helping him cook.  Are those the same kids you bring here to visit with dried snot all over their faces?
I'm just askin'.

Then, there's the roadkill delight that one of your employees made special because they just Know You Will Love It and you Have To Try It.
That's when the excuses begin: 'Gee, I had a really late breakfast and I'm still full,' or 'My stomach is bothering me today,' or 'How about I take some with me so I can enjoy it later?'
Enjoy it later: Toss it in a bathroom garbage where the smell of shit is expected.
And get out of the way because people rush the line like starving cattle, loading their plates and touching things then putting them back.  They scratch their arms and heads, lick their fingers, then touch more stuff.
Ahhhh!
I used to view potluck as a test of mind over matter and blithely went along to appear sociable, congratulating myself after the fact.
That was before staring at an oatmeal cookie and wondering if I was looking at a walnut or a booger.
Now, I will eat in these situations only if it's absolutely clear that the food came from a grocery store, deli or restaurant.
Otherwise, I think I'll pass on the scalloped potatoes with dog hair.

Image from theannies.org
Posted by Katy Josephine at 5:47 AM