Blame It All On Sycomore 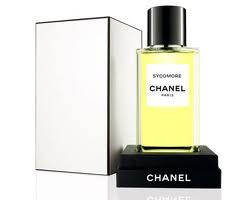 My peppy is down and my cranky is up because I failed to make the right perfume match for my day.  It seems like a plausible theory and I'm going with it.
You didn't really think we were going to talk about hormones, did you?
This morning, on the phone with Dad, I rated my peppy a embarrassingly low five on the 1-10 scale (we always exchange peppy ratings).
A five!
Shoot me now.
Later, in the middle of a facility meeting, I sat there thinking, 'what the hell am I doing here?'  Had it not been for the hot, 30-something German architect who said, 'yah?' after every sentence, the meeting would have been a total waste.
At one point during the day, I felt on the verge of tears, just because.  My middle child button (I'm invisible and might as well sit in the corner and play with lint) was out in all its glory, like a big red Bozo nose.
And then tonight, I exercised with no music at all, in total and complete silence.
Well, I farted once.

Image from lachanelphile.com
Posted by Katy Josephine at 7:56 PM