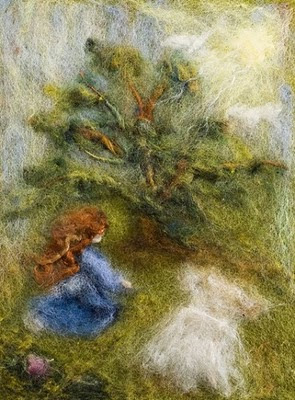 My mother fought hard to stay alive.
After we were told by her doctors that nothing more could be done, and she was put under hospice care, the writing was on the wall.
But she kept fighting.
So we didn't talk about the fact that she was dying.
Several times, I approached the topic of death with Mom and was told, in no uncertain terms, that we were not going to have that conversation.  Talking about death, according to her, would signify that we had given up hope and would only hasten her decline.

For the next two months, we lived in the reality of Mom's stubbornness and our denial.  Because of that, we missed the small window of opportunity when she may have been able to engage in meaningful discussions with each of us.
Honestly, I feel angry about that now.  Angry that my mom couldn't have a conversation that might have brought peace to her children and to her.  Angry that I was alone in wanting to help her move toward greater acceptance rather than join her in denial.  Angry that we watched her die and so much is left unfinished.
And now, it's too late.
It's done.
Inner Critic thinks I'm being unfair and childish.  People have the right to live - and die - the way they choose.  Intellectually, I understand this.
But, as a daughter, my emotions get in the way of my logic.  And, as a mother, I can imagine some of what I would want to tell my son.
Like how much I love him and what a light he is in my life.  And maybe we'd share memories like the time, as a little boy, he begged us to play The Dark Crystal over and over again at the part where Fizzgig throws a tantrum, and he laughed so hard he almost passed out.
Or we would laugh about how I used the f-bomb multiple times the one day I tried to teach him to drive.  B-man took over from there.
I would let him know that nothing can ever diminish my love for him and I will comfort and protect him in every way that I can, even in death.
That's what I needed to hear from Mom.
I know she loved me, but I'll never know what she might have said had she known she was leaving us.
In the coming years, I can imagine many one-sided conversations at her grave.  Someday, I may come to terms with that.  But right now, her death is the unfinished business of my life.
fairytalenewsblog.blogspot.com
Posted by Katy Josephine at 8:32 PM