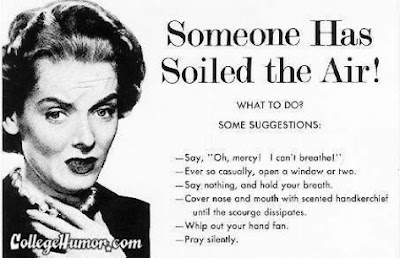 Have you ever thought about the power of smell in your work environment?
Mid afternoon yesterday, as I am wrapping up a meeting with two colleagues in my office, I notice a foul odor.
You know, the 'who farted?' smell.
I am flooded with thoughts of , 'which one of you slipped one out?'  'Did you really think I wouldn't notice?'  'Dude, fart in your own office.'

We end our meeting and I flip the reeds in my Saint Parfum 'Cut Hay' diffuser.  Now my office smells like cow shit on hay.
Right about then, I hear a commotion outside my door. My staff is up in arms. 'What is that awful smell?'  'I can't focus!'  'I'm going to throw up!'
My assistant contacts engineering and says, with her usual, understated tact,  'we have a strange odor that smells a little bit like sewage.'
That's why I hired her.
Apparently, the entire hospital has been invaded by the smell of a silent, greasy fart.
Don't act like you've never done it.

In spite of the awful smell, I'm fighting a deadline on a document so I do the same Mind Over Matter trick that I employ during potluck dinners and huge buffets, and continue working at my computer.
But all I can do is imagine broken pipes creating rivers of raw sewage floating above me, just waiting to drip through my ceiling tiles onto my head, my computer and everything else in my office.
So I mingle with my staff instead, trying to calm them, acting like it's no big deal.
After about an hour, the odor begins to subside and we all return to our work.
Come to find out, it isn't sewage that is causing the smell.  Apparently, the grease from our cafeteria is stored in a huge underground bin behind the hospital.  Yearly, the bin is opened and cleaned out.  The cold air forces the smell of this year-old substance down into our air vents and throughout the hospital.
If only it had been as simple as a fart.
Picture from translinktales.wordpress.com
Posted by Katy Josephine at 11:22 AM