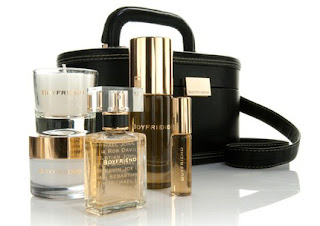 I returned to Sephora today and bought Boyfriend after only one date.

Take into account that I am in a Mainstream Marathon manic episode, but it also made me happy enough that I was compelled to make it mine.

My hunch is that Boyfriend will be a viewed as a commercial and formulation success; if not now, then in the future.  Perhaps falling into the same category as J-Lo Glow and Sarah Jessica Parker's Lovely.

Starting out, Boyfriend reminds me of something familiar, like MAC 3 with it's rough, vanilla amber vibe. The top notes are heady, so give it 10 minutes.
That's when the really good stuff happens.
From beginning to end, I don't pick up a lot of floral notes at all - except jasmine, which is a favorite of mine - but mostly woods, myrrh and amber.  Plus scratchy patchouli, leather and coffee, although none of these notes are listed.

A few other reasons I fell for Boyfriend:
1)  Kate Walsh took a risk and did something far outside of the usual celebuscent offerings.  And she didn't name it Kate Walsh (take note, Jennifer).

2)  Boyfriend has captured the essence and nostalgia of 'guy smell.'  I've known this scent (musky, sweet and outdoorsy) all of my life from hugging my grandfather, my dad, boyfriends of the past and B-man.

3)  Marketing is cheeky, and the design of everything from the bottle to the Boyfriend Kit is both absurd and titillating at the same time.  From a business perspective, it's brilliant.

4)  Controversy surrounds the release of this perfume.  I love me some controversy!  Anything that attracts this much buzz belongs in my hot little hand.

5)  Boyfriend works well with food.  We'd have to break up otherwise.

Sillage is moderate but deep, and it lasted on my skin all afternoon until I showered before bed.  Boyfriend draws you in with subtle confidence instead of inundating you with flowers and compliments.

Boyfriend is totally androgynous and I can imagine it smelling very nice on B-man.

In several reviews, Shalimar has been compared to Boyfriend, but I don't necessarily share that opinion.

However, it's been awhile since I wore Shalimar.  It used to be my signature scent as a young woman and I wore it daily for several years.  But I can't wear it anymore because it will forever be associated with the most annoying boyfriend I ever had.