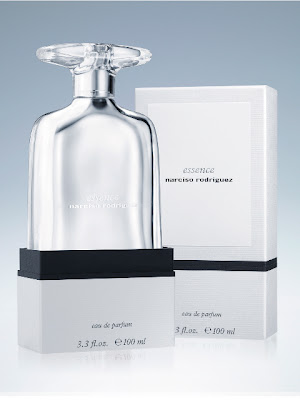 My #1 pick after last weekend's Mainstream Marathon?
Essence Narcisso Rodriguez.  Had a moment of rapture over this one.
First of all, it's...weird.  I'm a sucker for weird, you know that.
And soapy, soapy, soapy.  What kind of soap, I'm not sure, but the simple clean citrus and rosy musk just blew my skirt up.
Figuratively speaking.
I told you that B-man was coming with me so I wouldn't be tempted to cheap out.  We separated at the mall while I wandered through Sephora.   I could hardly wait to track him down and have him smell Essence, certain that he, too, would be stunned by its beauty.
Instead, upon sniffing, he gave me 'The Face.'
You know the one.
This was not the celebration I imagined where we hugged, then joined hands and did a happy dance through the mall.
Dude, I brought you to keep me from cheaping out, not to kill my rapture buzz.
Knowing that he didn't like Essence enough to convincingly override my cheapness, we left the mall to go to TJ Maxx.
Because no weekend is complete without a trip to
TJ Maxx.
As I gave it more thought, I appreciated B-man's position.  After all, he has a good nose and would normally err on the side of supporting a new purchase, so I took his opinion seriously.
Once I had pouted sufficiently.
Have you ever sampled something again and again, tried to convince yourself you love it, then acquired the perfume and never worn it?
That's one of the risks of 'perfumistaism,' and it's happened to me more times than I care to admit.  To insure I wasn't simply in love with the idea of Essence, I decided to wear it again to solidify my opinion.

On Thursday, I used up the rest of my sample and thought it was okay, but there was no swooning, no OMG moments, no blowing up of the proverbial skirt.
Then, Friday night, B-man and I met JD and our daughter-in-law, Sammy, for dinner.  The restaurant is close to Sephora, so I visited briefly and sprayed myself with Essence.  Since it would be at least another hour and a half  before we ate, it had plenty of time to dry down, and it's a perfume with mild to low sillage.
Deal Killer:  Essence is not great with food.  In fact, smelling it along side food was the first time I noticed the powdery aspect others have mentioned.

In a word, eww.
Because of this aromatic faux pas, Essence is now off my 'must have' list.

I hate it when B-man's right.
image from network.nationalpost.com
Posted by Katy Josephine at 9:04 AM