The Royal Wedding: I Miss Diana 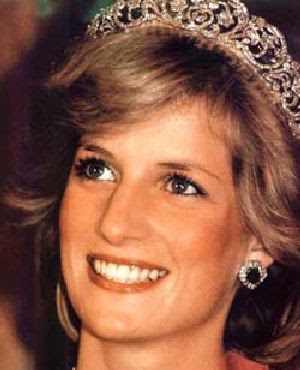 Of course, I watched the royal wedding, just as I watched the wedding of Charles and Diana years ago.
Mom would have loved this event.
Like many others, I have been observing Kate Middleton for awhile and I am impressed with her poise and good judgment.  Mature and solid, she is well prepared for her future role.
The wedding itself was elegant and beautiful in its own way.  Honestly, I was hoping for a dress with just a bit more 'edge' (especially from the design house of Alexander McQueen), but respect Kate for playing it safe with a look that was classic and elegant.
William also looked dapper, although his rapid hair loss has aged him considerably and robbed him of the potential hotness he possessed in his early twenties.
Beyond the superficial 'look' of the wedding, and its participants (Kate's sister, Pippa, did rather upstage her with that gorgeous dress), the ceremony itself had a 'heaviness' that I found oppressive and off-putting.
'...a marriage in the fear of God, and children brought up in the fear of God...'
'...on the dreadful day of judgment when the secrets of all hearts shall be disclosed.'
Yikes, I thought we were celebrating.
In addition to the blatant paternalism and patriarchy, the robed religious dudes walking somberly to and from the podium reminded me of the Mystics in the 80's movie, The Dark Crystal.
Honestly, I fast-forwarded through most of the wedding.  Get to the kiss, already.
As the couple rode in the carriage back to Buckingham Palace, I was distracted by William waving to the crowd.  He looked like a little boy on his way home from McDonald's with a Happy Meal, waving at his best buddy, who is riding his Big Wheel down the sidewalk.
Add the white gloves to his large hands?
Giggle successfully stifled.
I may as well just say it: without Diana, royal weddings all look the same.

Diana had that je ne sais quoi that set her apart from all the others.  On her wedding day, she was radiant, even in that beautifully awful fairy tale of a dress, which reflected her hope in a life that was happily ever after.
Fleshy and pink, she hadn't whittled herself down to a snap-her-arms-like-a-twig size zero.  Instead, she looked like a girl who knew the sensuous appeal of relishing a good meal with the man she loved.
Diana had the ability to make everyone around her seem more interesting; more desirable.  The queen was less dowdy, the palace more alluring.  If she loved Charles, then even he must be less stodgy than he appeared.
And she was messy, behaving inappropriately at times, sharing her passions when it would have been prudent to keep them to herself.  Diana's imperfection touched us all and let us see bits of ourselves in her life and her struggles.  We loved her for that.
The Queen of People's Hearts.
William and Kate are a beautiful couple and a great team.  They obviously love each other and will likely have a long and successful marriage together.
May they find and perpetuate Diana's legacy of magic.

image from www.topnews.in
Posted by Katy Josephine at 12:23 PM