Today was our Big Annual Barbecue at the hospital.  You know, the one I was supposed to MC but instead passed it on as an 'opportunity' to one of my directors.
Fortunately, blackmail was not required.
It rained like a mother.  Everything was under a tent, but it began pouring as we were standing in line for food.  Shelter was spotty so we all got wet.
People stink when they're wet.
Nothing 'outs' one's personal hygiene like a little rain.  Clouds of stale, unwashed body aroma surrounded me.  I was standing behind a guy that looked well-groomed, but when it rained, he smelled pissy and sour.
What IS that?
He might as well have been wearing a t-shirt that said, 'This Rainstorm is the First Shower I've had in Three Days.'  And if the top half of his body smelled that bad, imagine what his arse...
Did I really say that? 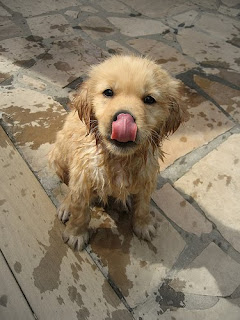 By the time we reached the food, I was longing for a tent full of wet puppies, which may have been more appetizing.

On a positive note, Agent Provocateur smells as good in the rain as it does in the office.

Pictures from fotosearch.com
Posted by Katy Josephine at 6:25 PM